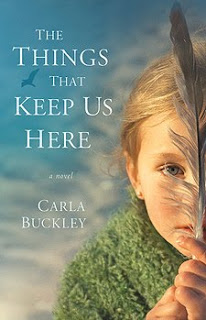 A year ago, Ann and Peter Brooks were just another unhappily married couple trying - and failing- to keep their relationship together while they raised two young daughters. Now the world around them is about to be shaken as Peter, a university researcher, comes to startling realization: A virulent pandemic has made the terrible leap across the ocean to America's heartland.
And it is killing fifty out of every hundred people it touches.
As their town goes into lockdown, Peter is forced to return home - with his beautiful graduate assistant. But Brookses' safe suburban world is no longer the refuge it once was. Food grows scarce, and neighbor turns against neighbor in grocery stores and at gas pumps. And then a winter storm strikes, and the community is left huddling in the dark.
Trapped inside the house she once called home, Ann Brooks must make life-or-death decisions in an environment where opening a door to a neighbor could threaten all things she holds dear. 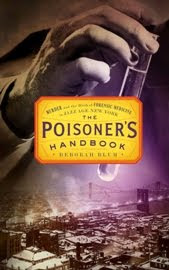 Following the trail of evidence that leads them to downtown tenements, swanky smoke-filled jazz clubs, and moonshine distilleries. Norris and Gettler work with a creativity that rivals the most imaginative murder. Yet each case presents a new lethal challenge, and the scenarios astound: Norris and Gettler investigate a family mysteriously stricken bald, Barnum and Bailey's Famous Blue Man, factory workers with crumbling bones, a diner serving poisoned pies, and many others.
From the vantage of their laboratory in the infamous Bellevue Hospital it quickly becomes clear that killers aren't the only toxic threat. Modern life has created a treacherous landscape, and danger lurks around every corner. Automobiles choke the city streets with carbon monoxide; potent compounds, such as morphine, can be found on store shelves in products ranging from pesticides to cosmetics. Prohibition incites a chemist's war between bootleggers and government scientists while in Gotham's crowded speakeasies each round of cocktails becomes Russian roulette.
Norris and Gettler triumph over seemingly unbeatable odds to become the pioneers of forensic chemistry and the gatekeepers of justice. A beguiling concoction that is equal parts true crime, twentieth-century history, and science thriller.

More books......
Appetite for America, by Stephen Fried
The Art of Eating In, by Cathy Erway
Carved in Bone, by William M. Bass
Except the Queen, by Jane Yolen
Flesh and Bone, by Jefferson Bass
The Girl Who Chased the Moon, by Sarah Addison Allen
House Rules, by Jodi Picoult
Immortal: The life of Henrietta Lacks, by Rebecca Skloot
Lie Down with the Devil, by Linda Barnes
Lunch in Paris; a love story with recipes, by Elizabeth Bard
Making Toast, by Roger Rosenblatt
Midnight House, by Alex Berenson
Never Look Away, by Linwood Barclay
Pallbearers, by Stephen j. Cannell
Paul and Me: 53 years of adventure, by A. E. Hotchner
Poker Bride: the first Chinese in the wild west, by Christopher Corbett
Postmistress, by Sarah Blake
Queen's Lover, by Vanora Bennett
Red Sings from Treetops, by Joyce Sidman
Secrets of Eden, by Christoph Bohjalian
Shadow Tag, by Louise Erdrich
Shattered, by Karen Robards
Silent Sea, by Clive Cussler
Split Image, by Robert B. Parker
Sweet By and By, by Sara Evans
Think Twice, by Lisa Scottoline
A Wife's Tale, by Lori Lansens
Wild Ride, by Jennifer Crusie and Bob Mayer

- 2012 National Library Week
Here is what is happening at the Madison Public Library to celebrate our continued mission of providing access to "dynamic collections, appropriate technology, and global information to support and enrich individual, family, and community life" within...

- Brown Bag Book Club Reads..
The next Book Club will be June...

- New Arrivals......
Trevor Stratton is an ?American professor and translator, newly arrived at a Paris university. There, in his office, he discovers a box filled with letters, photographs, and antique ovjects--a beautiful paiar of gloves, a rosary, and a silk scarf....