On Monday, Sept. 19, The Virginia Room's Arlington Reunion History Program will host a community discussion on "Queen City," Arlington's black community after Freedman's Village and before the Pentagon, at the Central Library Auditorium, from 10:00 am - 12:00 p.m.

The original residents of Queen City were descendents of the residents of Freedman's Village, which had been established by the federal government during the Civil War as a home for displaced/freed slaves. A tightly knit African American community, Queen City was particularly focused on providing education for its children and was described by George Vollin, a former resident, as "a real happy, solid community."

The neighborhood eventually disappeared when residents were displaced in 1941 as construction on the Pentagon and surrounding roads began: 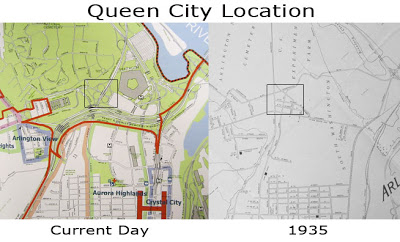 "Queen City was not razed for the Pentagon building, but the overall Pentagon project. In order to accommodate the large number of individuals who would be commuting to and parking at the Pentagon on a daily basis, extensive accommodations had to be made for the automobile.

The cloverleaf highway structure, which the Columbia Pike feeds into and is found to the west of the Pentagon, remains the exact location of Queen City. Therefore, Queen City was destroyed for Pentagon's needed transportation corridor, which eventually would come to include over thirty miles of highways and ramps, including twenty-one overpasses."

If you can't make it to the program, and would like to learn more, you can visit the Virginia Room, where the local history archive includes Arlington's Queen City, by Claire Burke.

- Become An Arlington History Expert This September
General Land Use Plan MapSeptember is full of opportunities to learn more about Arlington's fascinating history: Monday, Sept. 12 - Ed Bearss: The Role of Northern VA in the Civil War. Bearss, a resident of Arlington, is the retired chief historian...

- Ed Bearss To Speak On Northern Va And The Civil War
Long Bridge - predecessor to the 14th Street Bridge - spanned the Potomac during the Civil War. In the distance, rural Arlington (then Alexandria County) was little more than trees and farms. In the foreground, Union troops stood guard 24 hours a day...

- Presentation: Modern Day Ukraine - May 15
Updated 5/13: The screening of "A Kingdom Reborn" has been canceled, but in its place will be a presentation about modern-day Ukraine and plans for the trip to Ukraine by members of the Ivano-Frankovsk Sister City committee and members of the Arlington...