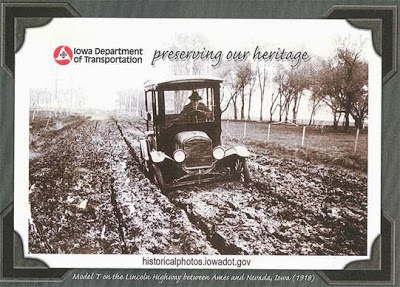 The story of transportation in Iowa starts nearly 12,000 years ago, with nomadic peoples roaming the area. 2,500 years ago rivers became transportation routes for trade. Transportation remained human and animal powered until the 1800s, when the first steam boats plied Iowa?s navigable rivers. Now Iowa is home to transportation by highway, water, air, public transit, rail, and trail, much of it built, maintained, or overseen by the Iowa Department of Transportation (DOT).

The history of Iowa?s various modes of transportation--and the DOT itself--is the focus of the next Reminisce Society program as Iowa DOT librarian Leighton Christiansen presents ?Rivers, Roads, & Rails: A Journey in Transportation? on Tuesday, November 26th at 10:00 a.m. at the Ottumwa Public Library.

This year the Iowa DOT celebrates 100 years of connecting the people of Iowa to each other and the world. The photos, items, and stories that Christiansen will share highlight the many ways the history of Iowa transportation has touched nearly all aspects of Iowa commerce, life, and leisure. From native Americans and early traders traversing Iowa?s rivers pre-1800, to railroads linking cities and towns in the latter half of that century, to Model Ts getting stuck axle-deep in Iowa?s mud roads in the 1920s, the history of transportation in our state is an interesting and remarkable story. Please plan to join Christiansen as he presents his highly acclaimed tale of Iowa?s rivers, roads, and rails. Reminisce programs are free and open to all. For further information, please call the library?s Reference Desk at 641-682-7563, extension 205.