UPDATE: Reminisce Society will be postponed until Tuesday, March 5 due to the winter storm. 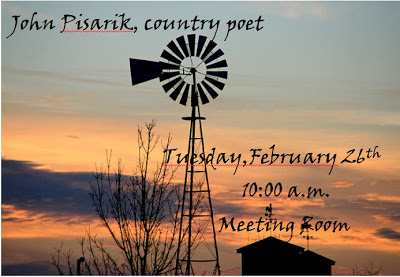 Ottumwa Public Library?s Reminisce Society is proud to host country poet John Pisarik at its February meeting. Pisarik, a native Iowan, will share his original poetry and songs during a program on Tuesday, February 26th, at 10:00 a.m. in the library?s meeting room. Ranging from country themes to the Civil War to the West and cowboys, Pisarik?s poetry reflects the wide range of life experiences he has encountered.
Raised on a small dairy farm near Mt. Vernon, Iowa, Pisarik left home at age 15 with his oldest brother, just out of the army, to homestead in Alaska. The homestead dream was unsuccessful, but while there, Pisarik developed a love of poetry after being exposed to the writings of Robert Service, who wrote ballad-style poetry of the Arctic and the gold rush. Pisarik later worked on a ranch in Montana, then returned home and purchased a small farm not far from his parents in Mt. Vernon, only to lose his dream a second time, a casualty of the 1985 farm crisis. From there, Pisarik worked in a variety of jobs, including as a police officer and as a respiratory therapist at a Cedar Rapids hospital and a member of the Neo-Natal Flight Team. Following a bout of deep depression, he began writing poetry while working at the Quaker Oats Company.

In 2007, Pisarik moved to Davis County, where he and his wife run a small cow/calf operation. He has continued to write poetry?and songs?and has performed for groups throughout the area. ?I enjoy sharing my poetry and music whenever I can,? Pisarik said.

Reminisce programs are free and open to all. For further information, please call the library?s Reference Desk at 682-7563, ext. 205.

- The Mississippi River In Song: A Musical History Tour
For our October program the OPL?s Reminisce Society is pleased to have performer Dean Klinkenberg present at the upcoming Reminisce program, Tuesday, October 28, at 10:00 a.m. in the library?s meeting room. There are hundreds of songs about the Mississippi...

- Rock Out With Reminisce
After taking a break for the summer, the Ottumwa Public Library?s Reminisce Society is back with all new programs for fall. From Rock & Roll to tea with an Ottumwa legend, the fall season promises to educate, enlighten, and entertain audiences. The...