﻿ Rock Out With Reminisce
Library

Rock Out With Reminisce 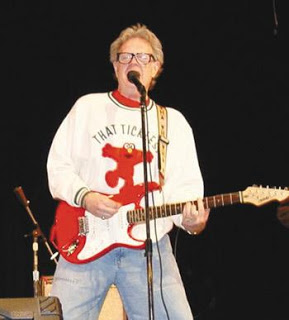 After taking a break for the summer, the Ottumwa Public Library?s Reminisce Society is back with all new programs for fall. From Rock & Roll to tea with an Ottumwa legend, the fall season promises to educate, enlighten, and entertain audiences.
The season begins with a program by Iowa Rock & Roll Hall of Famer Layton Zbornik on Tuesday, September 18th at 10:00 a.m. Zbornik, born and raised in Albia, was singing on the radio by the time he was 8 years old, and as a teenager, he wrote and recorded Iowa?s first Rock & Roll record, ?Janet.? After recording additional records under the name ?Jerry Martin,? Zbornik left the music scene to marry his high school sweetheart, but eventually returned to the air in the 1960s as King Zbornik, one of the top rock DJs in America. After a mid-life career change that led him to become an educator, Zbornik, now in his 70s, has returned to his Rock & Roll roots and travels the state with his very entertaining program, ?Juke Boxes, Pool Halls, and Duck Tails.? His program, sponsored by Humanities Iowa, a private, non-profit state affiliate of the National Endowment for the Humanities, includes an entertaining look at those good old days of the 40s, 50s, and 60s, seen from the perspective of a young man who grew up in rural, small town Iowa and who experienced first hand the cultural changes brought to American society by the music of the time. Zbornik?s program is full of great memories and great music, a fun and entertaining look at the early years of Rock & Roll.
OPL?s Reminisce Society is open to anyone with an interest in history and the ?good old days.? Programs are held the third or fourth Tuesday of the month at 10:00 a.m. in the library?s meeting room. There is no cost or obligation, and everyone is welcome to attend. For further information, please call the library?s Reference Desk at 641-682-7563, extension 205. And please join us for a great chance to reminisce!!


- "iowa History In A Cloth Bag" -- Reminisce Society March 2014
For our March program the OPL?s Reminisce Society is pleased to present Humanities Iowa speaker Michael Zahs. Zahs will present ?Iowa History in a Cloth Bag,? at the upcoming Reminisce program, Tuesday, March 25, at 10:00 a.m. in the library?s meeting...

- The Reminisce Society -- On Summer Break
The Reminisce Society is taking the summer off. Watch for new programs beginning in September?and in the meantime, enjoy the beautiful weather, the sights and sounds (and tastes!!) of the season, and the remarkable history available to us 24/7 right here...